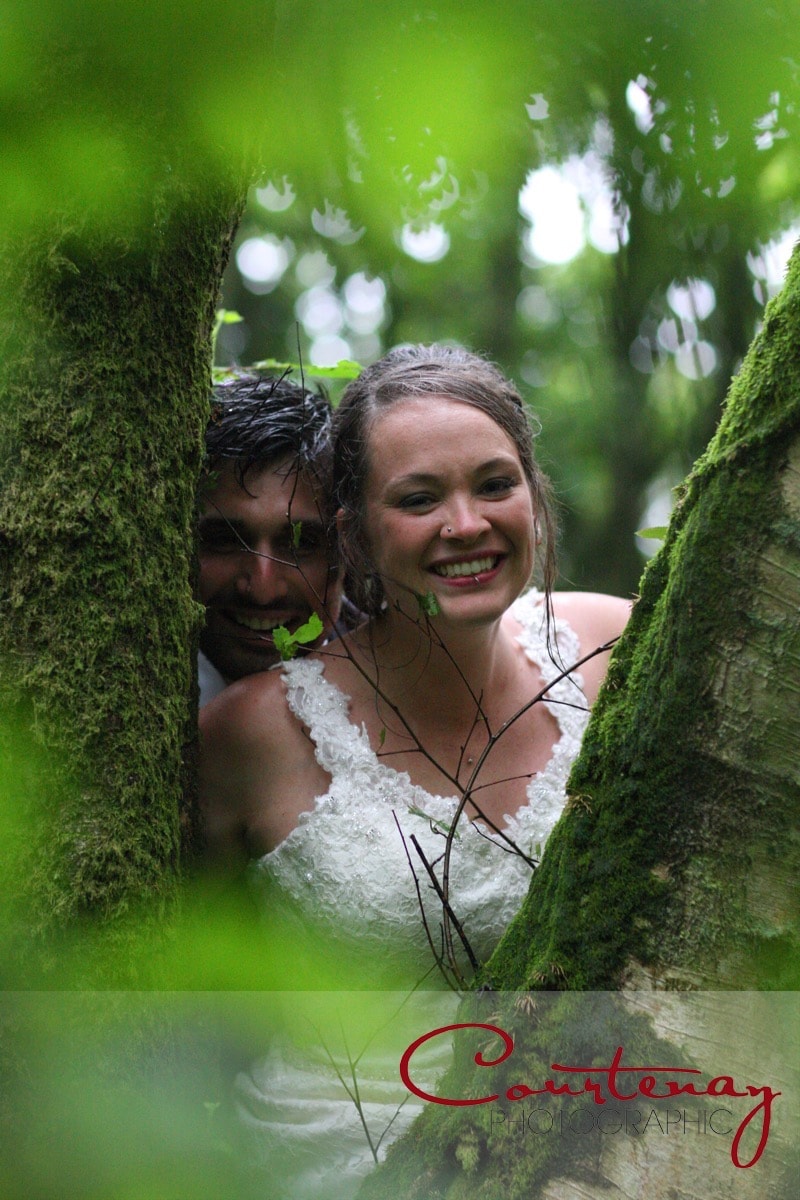 Saturday began with absolutely no hope of any improvement in the already-mizzling rain that was busy soaking the countryside as I arrived at South House Retreat in Piddletrenthide. I’d been looking forward to this wedding for months – in all my years I have yet to do a fully outdoor wedding in the woods, and Joanna & Michael had planned their entire wedding day around a woodland glade in Milborne Wood.

And then it rained!

For a lot of brides, a day of rain is disappointing. For a bride who has planned her entire wedding day out of doors, it was actually disastrous. I took a deep breath as I knocked in the door, not sure what the mood in the house was going to be as Bridal preps were underway…

I shouldn’t have worried. From the moment I set foot inside  South House Retreat I knew the day was still going to be a good one. The cheerful acceptance of the weather as ‘typical’ set the tone for the day – and it wasn’t just Joanna who was still grinning. The whole wedding party had decided the only thing to do was laugh, and make the most of the day anyway. I’ll admit it was a first for me to see the preps include fancy wellie modelling, and the construction of some properly ingenious dress covers made out of black bin bags for the bridesmaids.

I stayed to catch Joanna’s Dad see her in her wedding dress, and then nipped off to navigate the wood before they arrived.

I entered Milborne Wood from the main road onto the farm track, which got increasingly muddy as it left the fields and entered the wood itself. The bar van had got stuck, and they were having to port the beer into the woods with a wheelbarrow.
Some guests had camped over the night before, others were arriving and setting up their tent before the ceremony. The track leading to the clearing was already boggy, and as the rain continued to fall I could see things were set to get worse as the day went along.

The day was planned around a clearing in the centre of Milborne Wood – the canopied bar stood at one end of clearing, a small temporary marquee at other, with camping in the woods behind (and compost loos on stilts, if you’re wondering!).
The ceremony itself was planned for the centre of the glade, but it was clear there was no way an outdoors ceremony could go ahead in the downpour.

More guests arrived with their fancy wedding shoes switched up for wellies, and umbrellas shared as they scampered into the marquee which was the new location for the ceremony. The rain just kept getting harder, and we rolled up one end of the marquee just for the ceremony so that the backdrop at least could be the woodland. Everyone squished in – but had to sit at the laid tables that were ready for the reception, there was no time or room to move them for a more typical ceremony layout!

Joanna arrived with her bridesmaids and dad, all together in a camper van. The bridesmaids looking fab in their genius bin bag outers, laughing at the horrendous weather as they helped Joanna out. By this time the rain was absolutely lashing down – beyond ridiculous, and I loved that Joanna and her attendants simply laughed their way thourgh to the marquee under their umbrellas.

They entered the marquee at the back, whisked off the black bin bags and wellies, and processed through the marquee to the front for the humanist ceremony (Joanna and Michael had already married at a registry office the day before, so that they could have the ceremony they wanted in the trees). Their pet boxer dog was their ring bearer (he won everyone’s hearts with his timid bafflement of the whole process), and friends and family joined in with readings before the vows they had written themselves.

Naturally there was no processional after the ceremony – we had nowhere to go! – so everyone stayed for drinks and canapés in the shelter of the marquee, with few brave guests dashing across the clearing to use the loos and reach the cheery-looking bar festooned with fairylights.

Milling amongst the guests I didn’t hear one complaint – everyone pitched in, with all the guests taking their cue from Joanna & Michael and simply seeing the funny side. Really – what can you do about the weather?!
Afternoon High Tea was served, with everyone cheerfully sharing serving duties and fetching and carrying as needed as the marquee was rather cramped for room, adding the general warmth and cheerful chaos of the makeshift turn of the day.

After the speeches – we managed a few family formals at the end of the marquee, and then Joanna & Michael decided they still wanted to go for a walk in the woods. The rain had eased up to a more steady patter for a while, so we headed out – Joanna eschewing her weelies in favour of staying in her scarlet ladybird salsa wedding shoes. We were all soaked through anyway, so felt a short turn outside wouldn’t make much difference to us! We had a stroll through the woods, and Joanna & Michael climbed a tree (like you do…) before we arrived back to the clearing, and Michael’s surprise of a visit from one of his friends with his birds of prey collections.

Once everyone had spent some time learning about and admiring the birds, we all tucked back into the shelter of the marquee for the cutting of the amazing the wedding cake – a woodland design that had been perfectly created by Joanna’s bridesmaid.

And so the couple took to the dancefloor for their first dance – but in the spirit of the day they decided not to go with their romantic planned choice. Instead they set off into married life to Gene Kelly ‘singing in the rain’. It couldn’t have been more perfect!

Finally it was time to take my soggy self home, and leave the guests to continue the rest of the evening fun the same way they’d enjoyed all day.
Thank you so much Joanna & Michael, it was a joy to share your brilliant day with you. Well done for turning what could have been a catastrophe for many couples on its head, and making it the wedding people will still be talking about for years to come, for all the very best of reasons. x

Some of the very many… 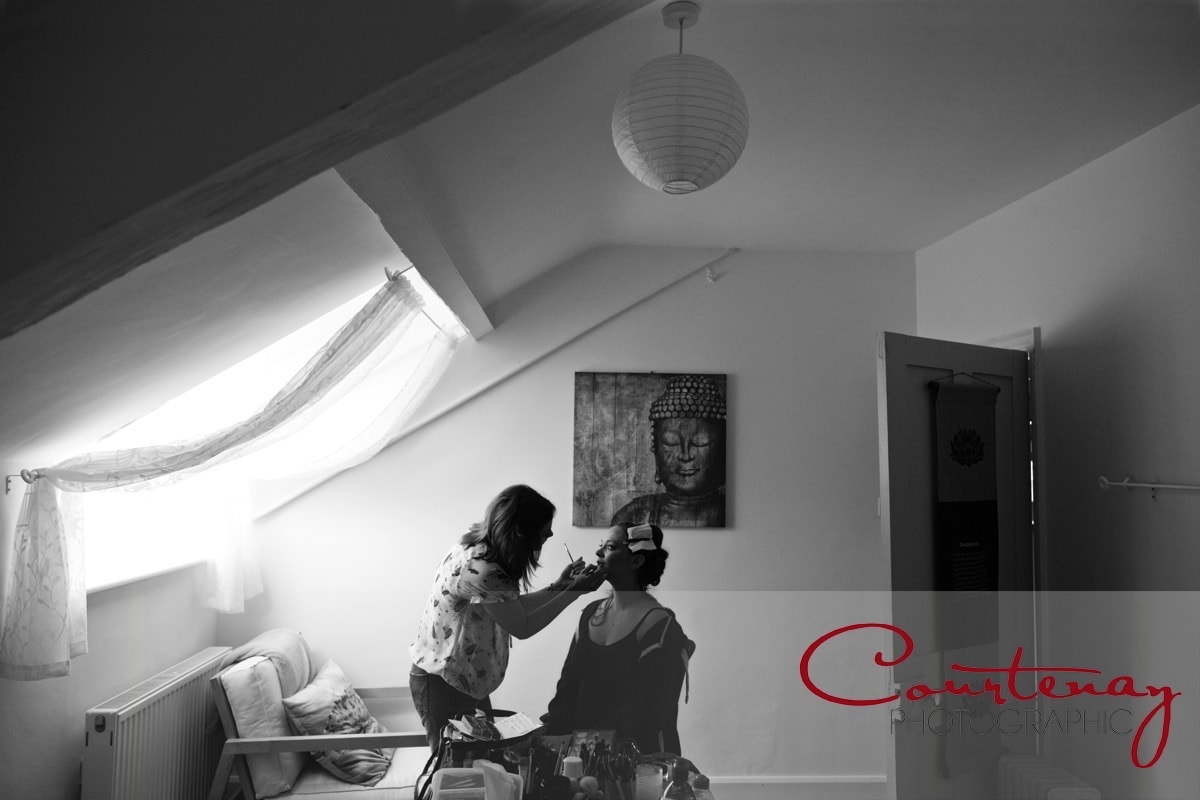 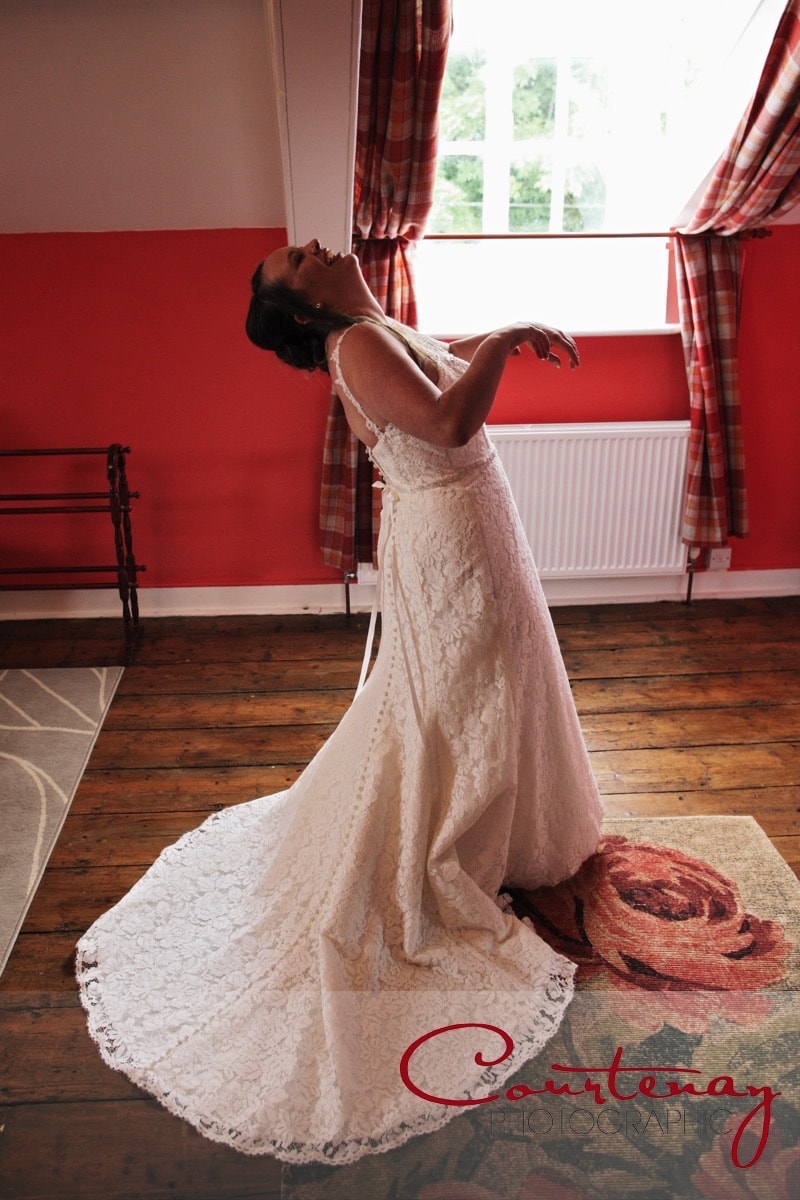 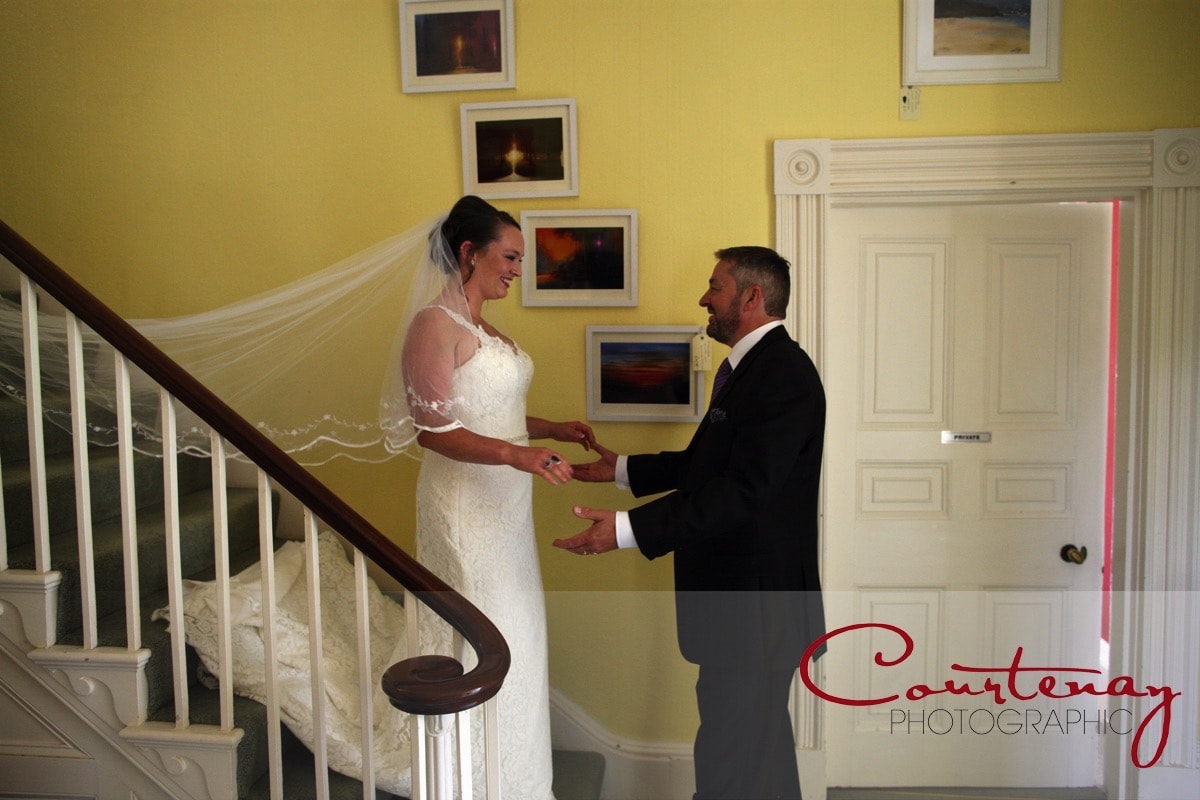 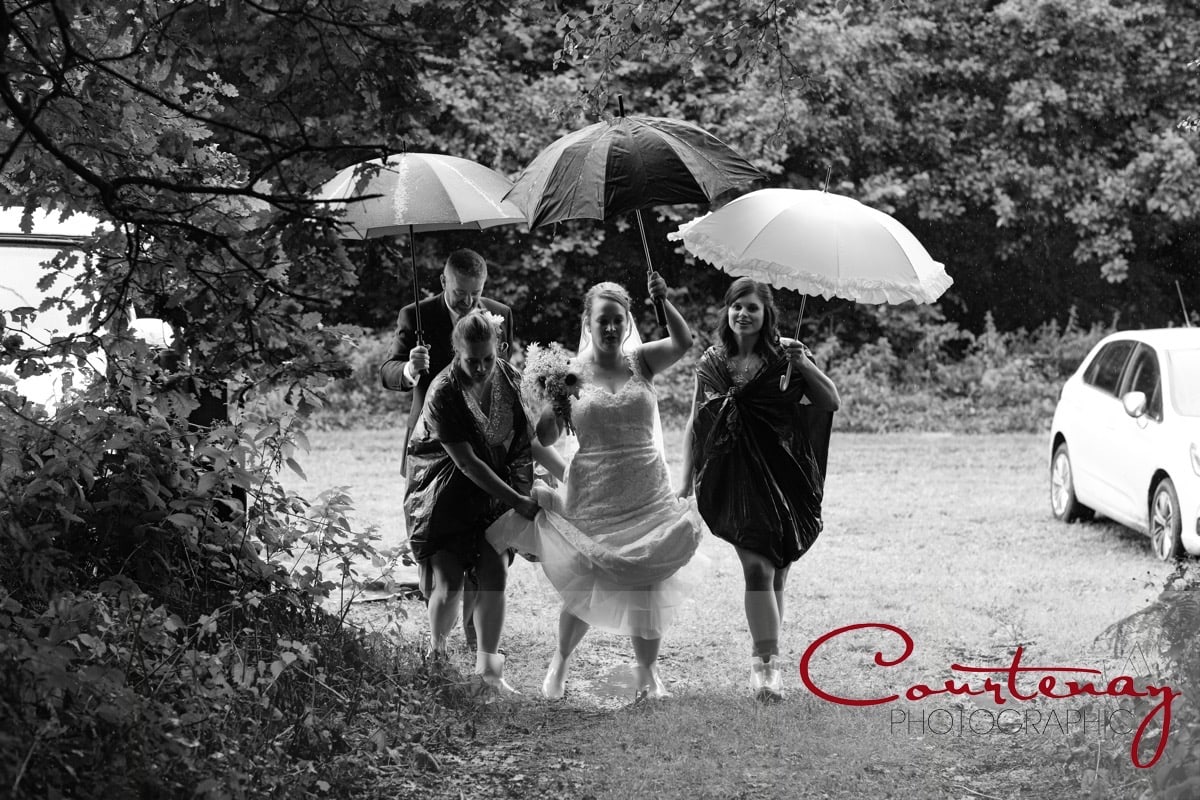 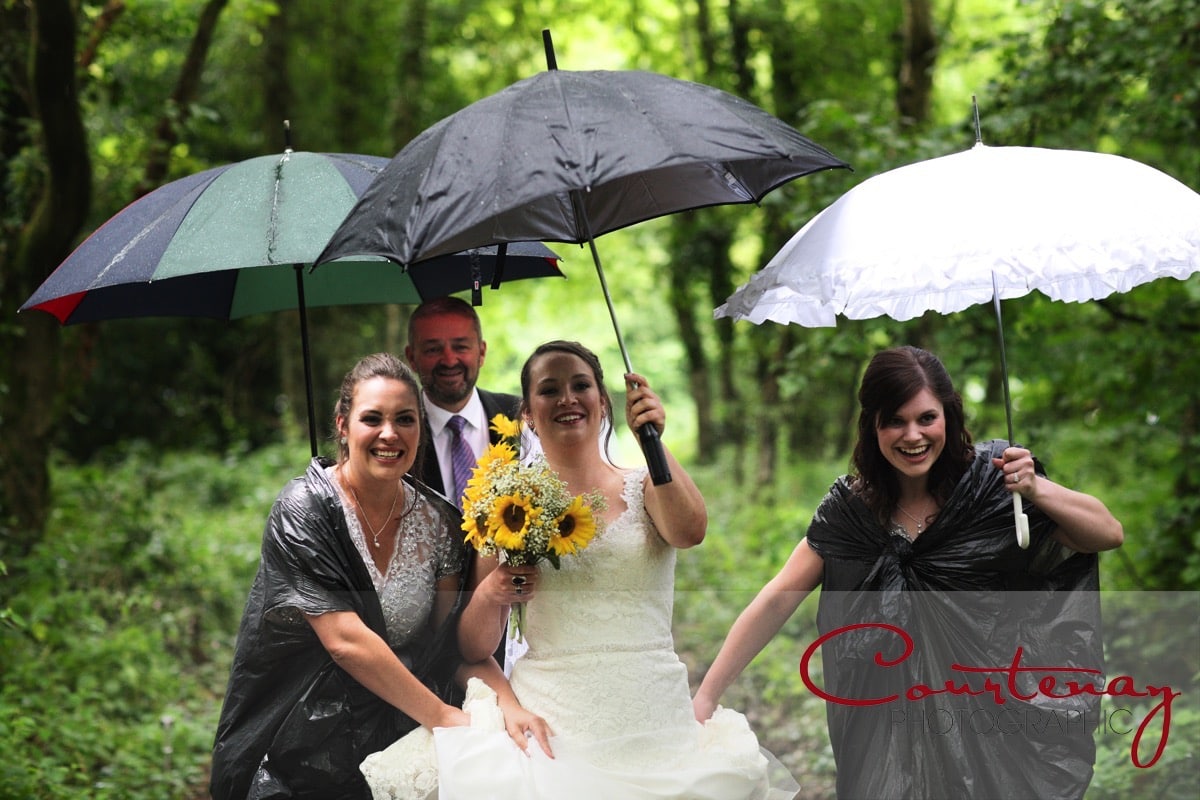 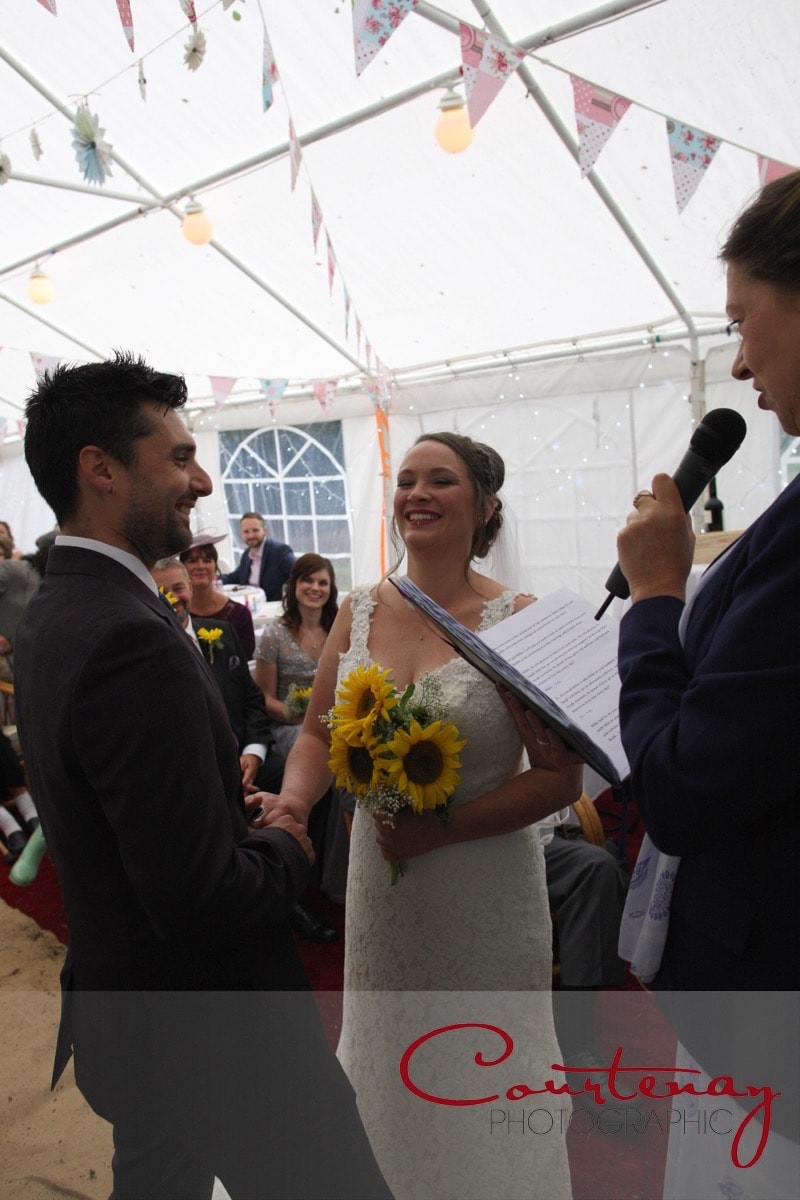 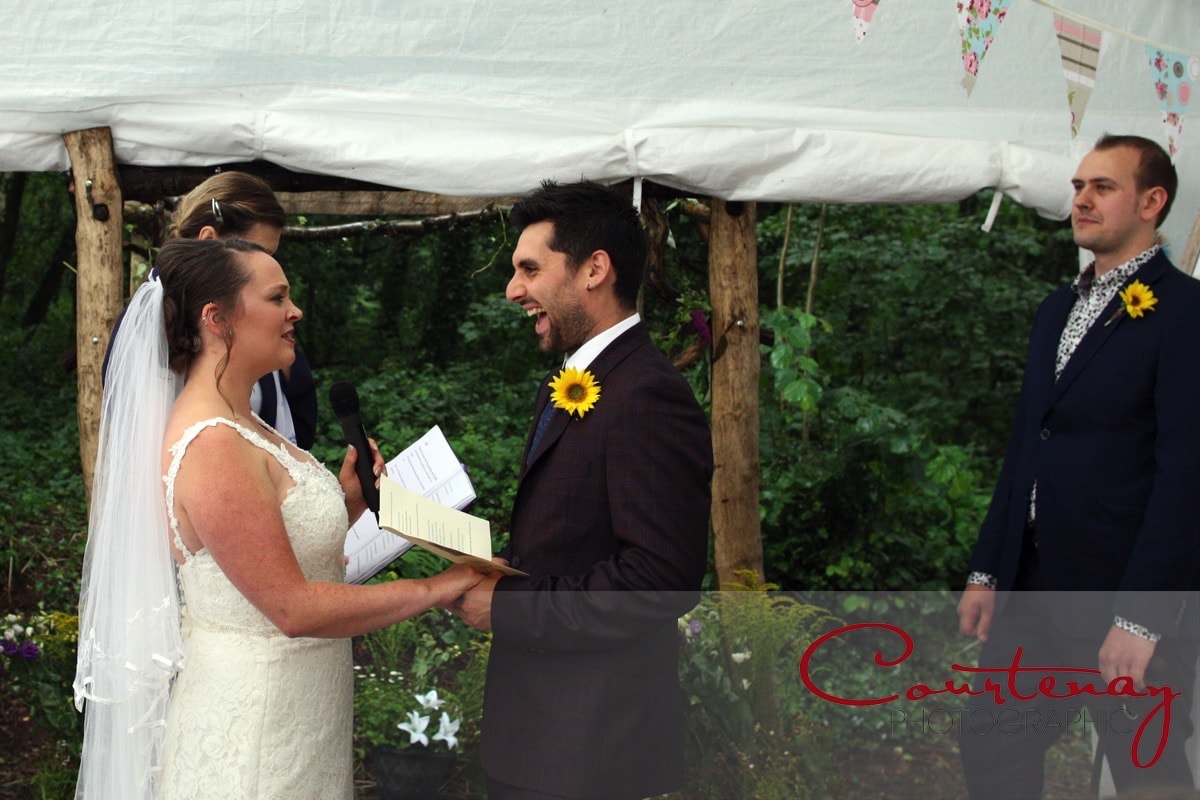 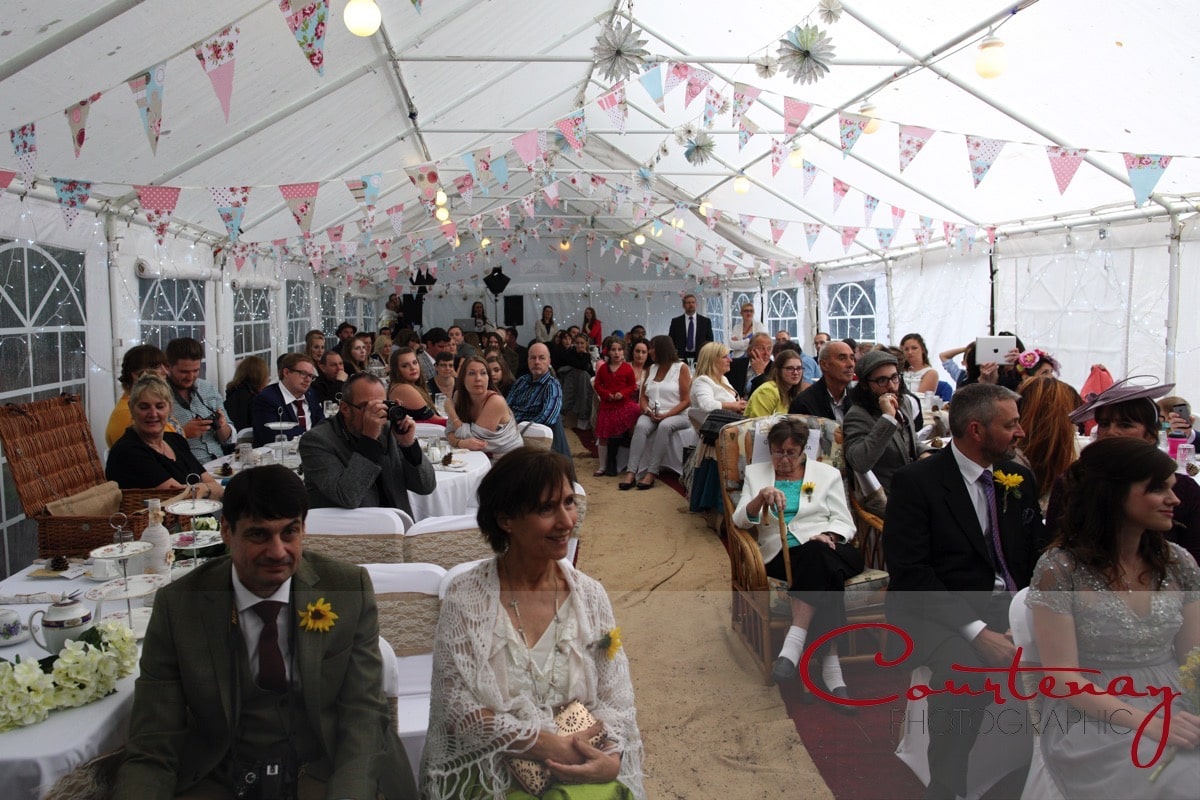 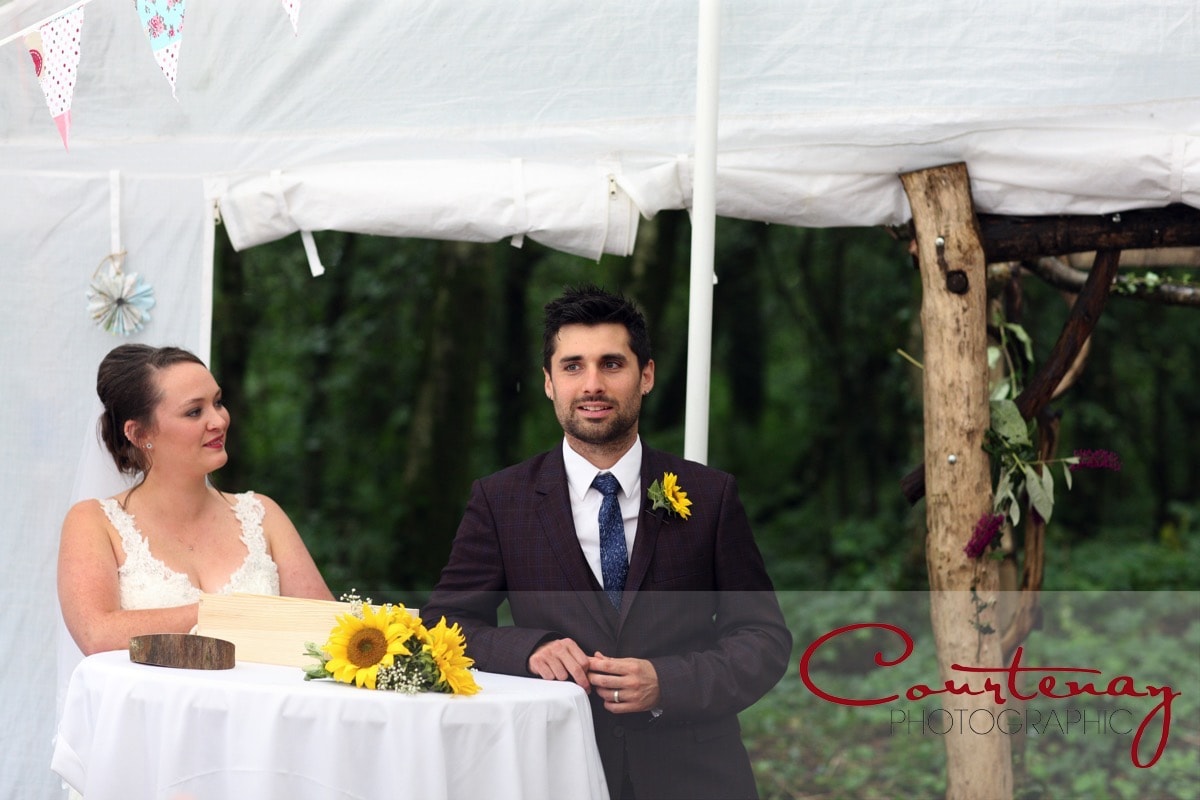 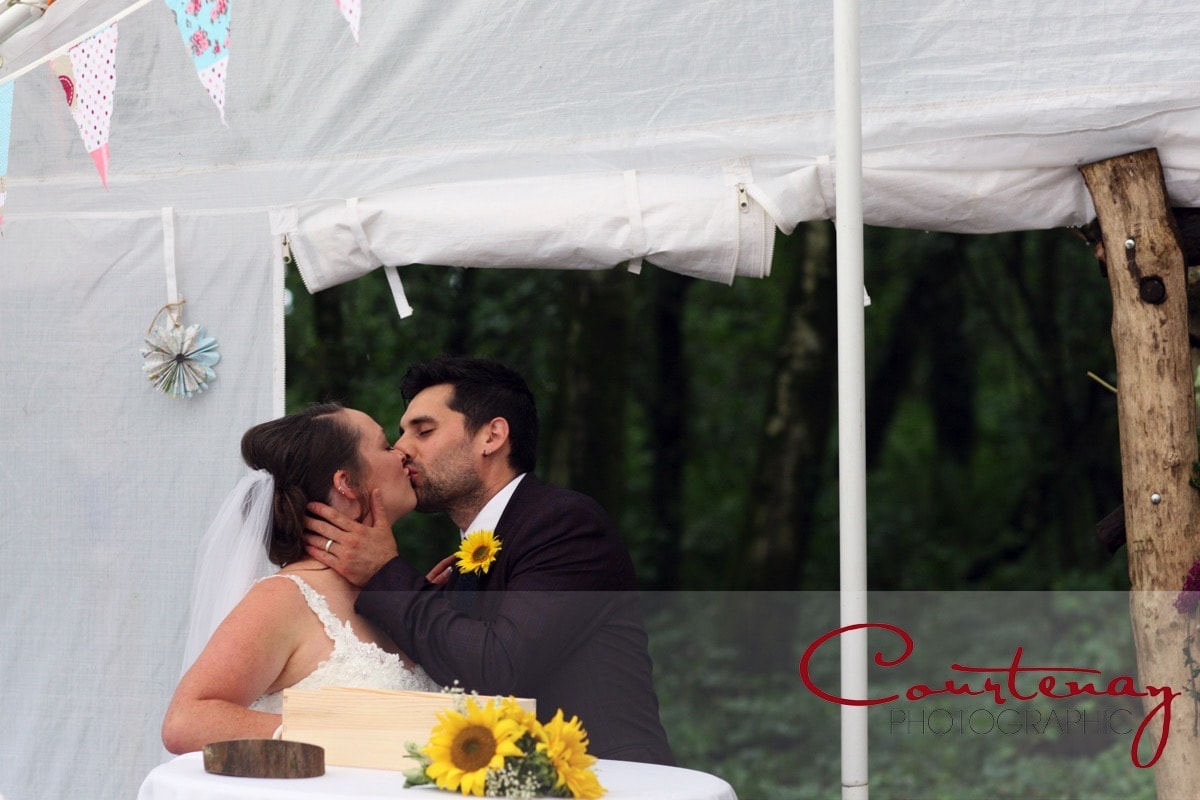 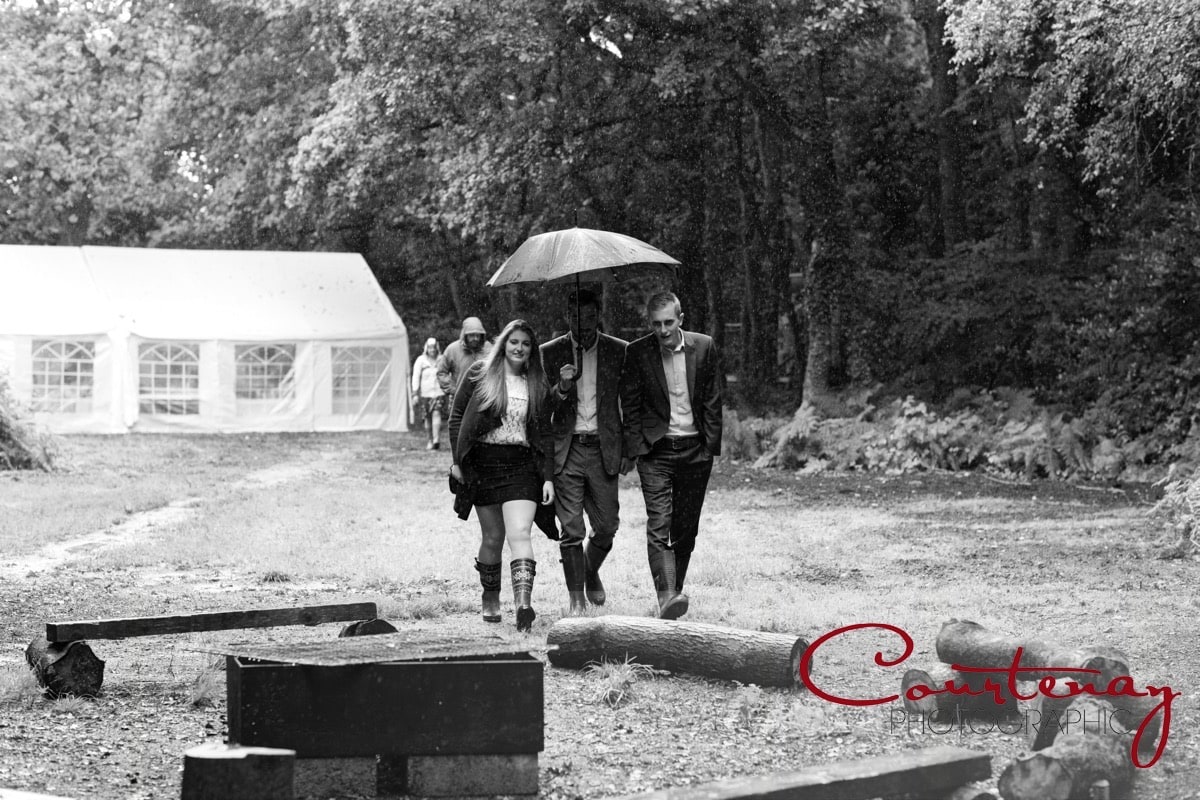 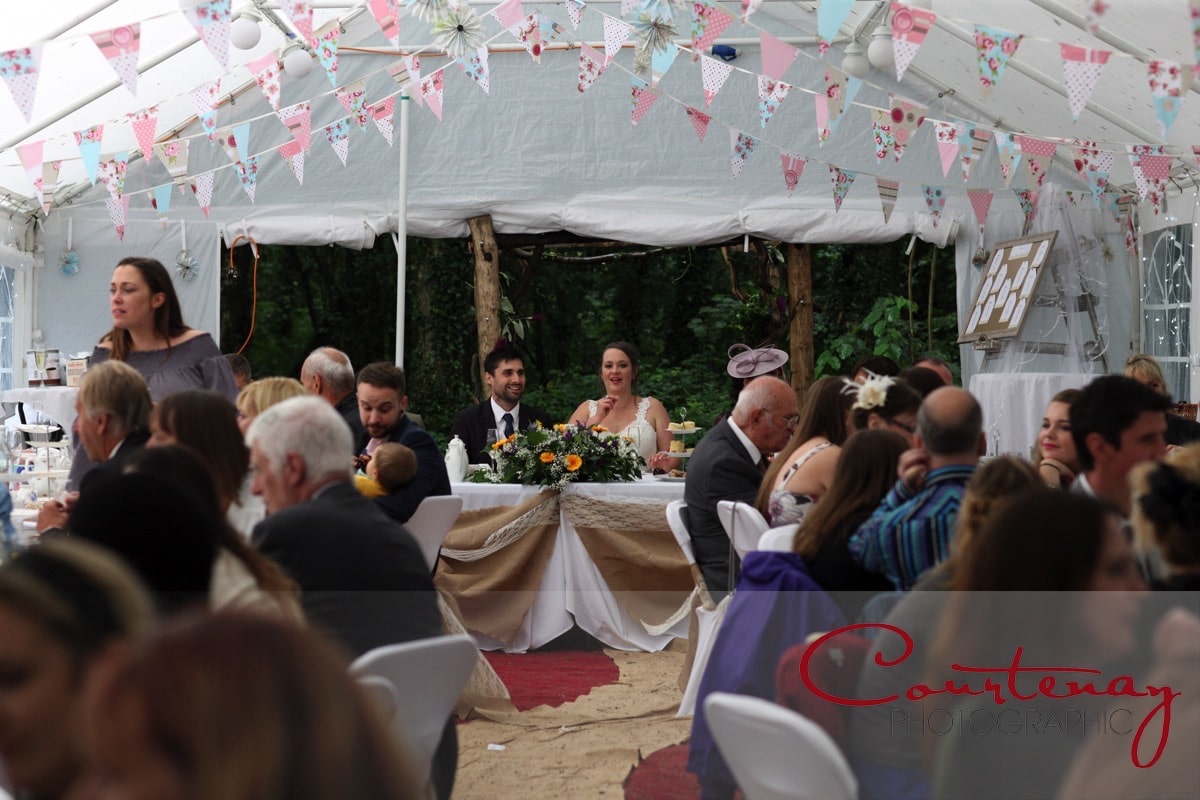 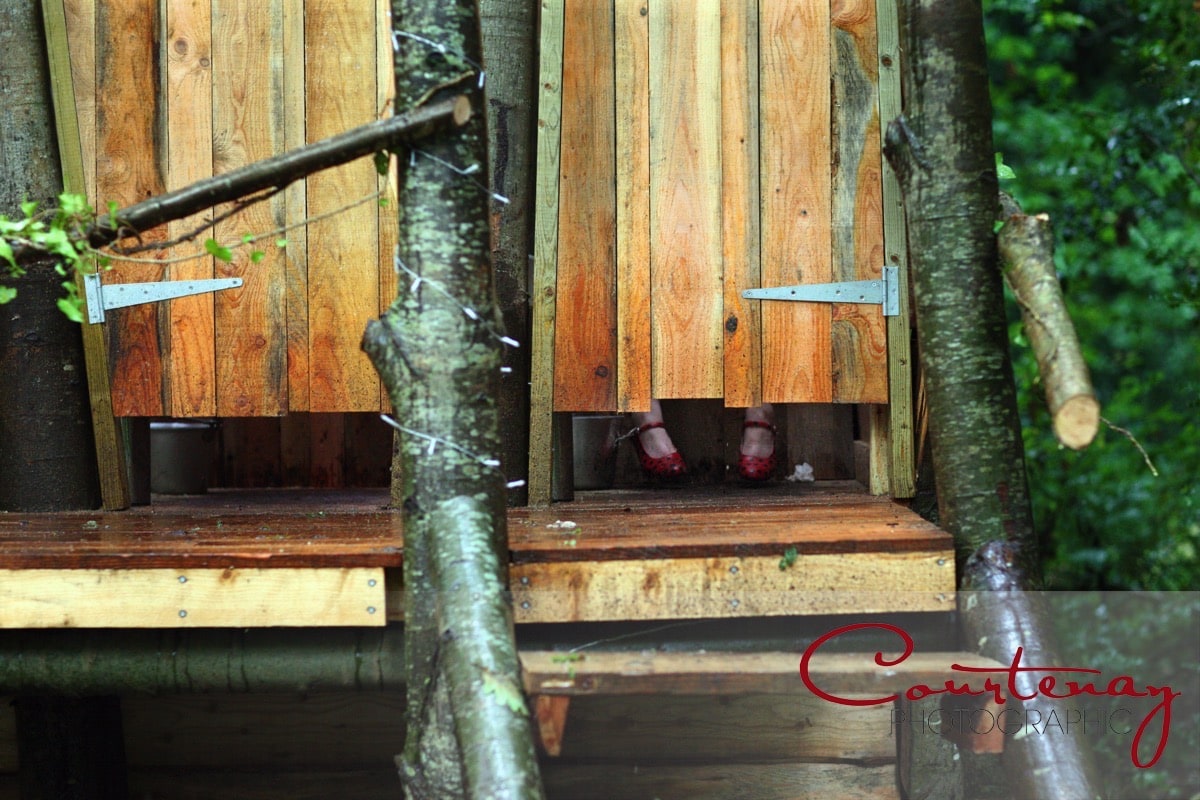 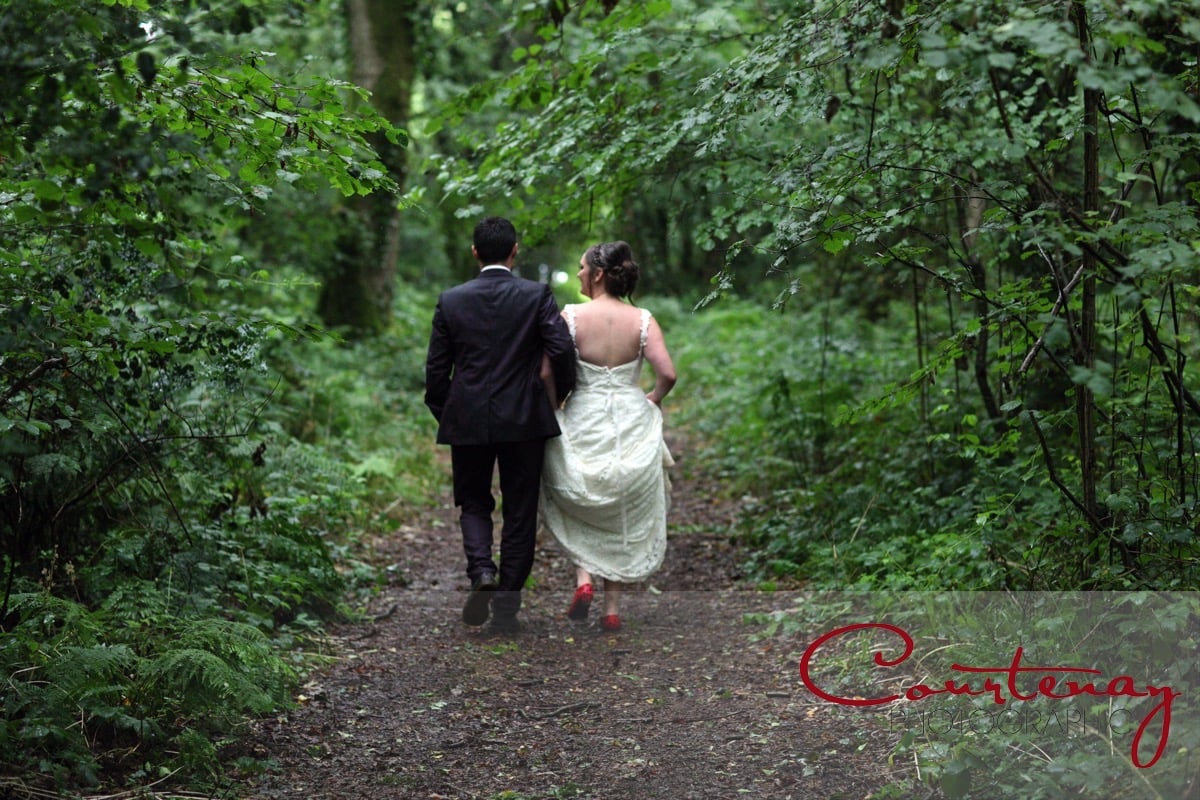 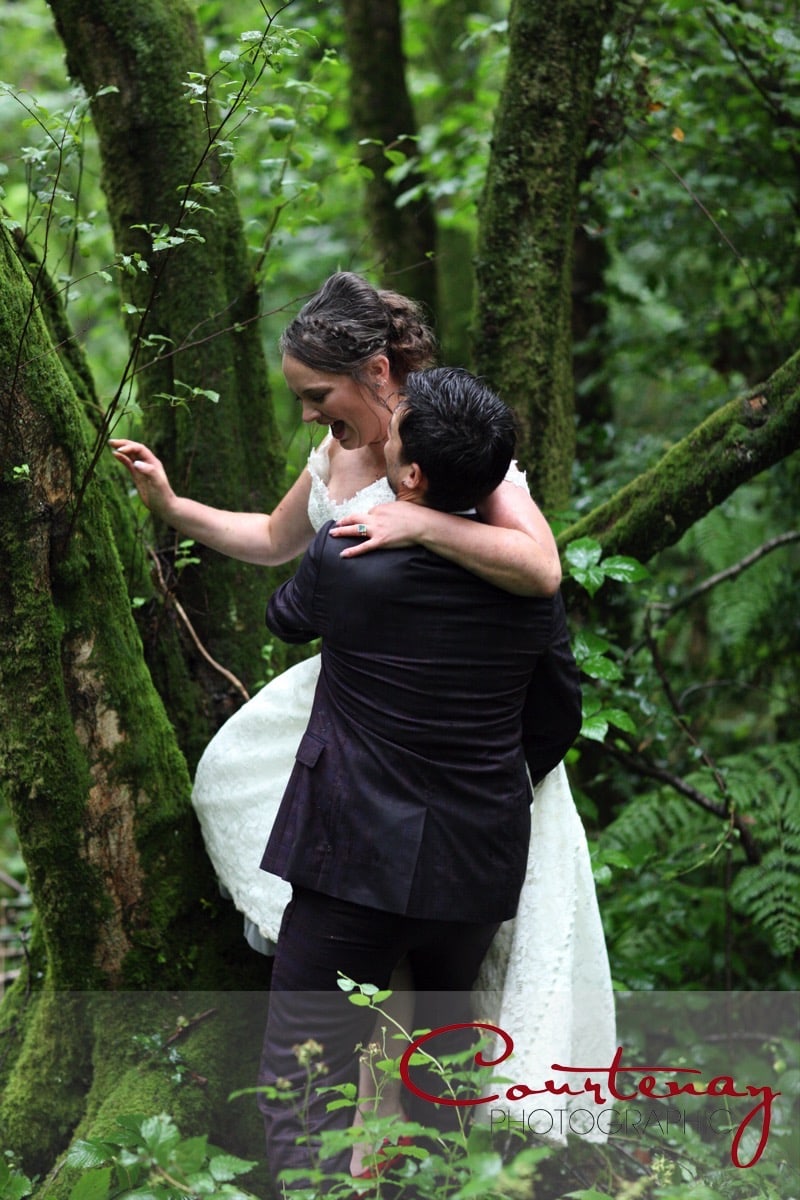 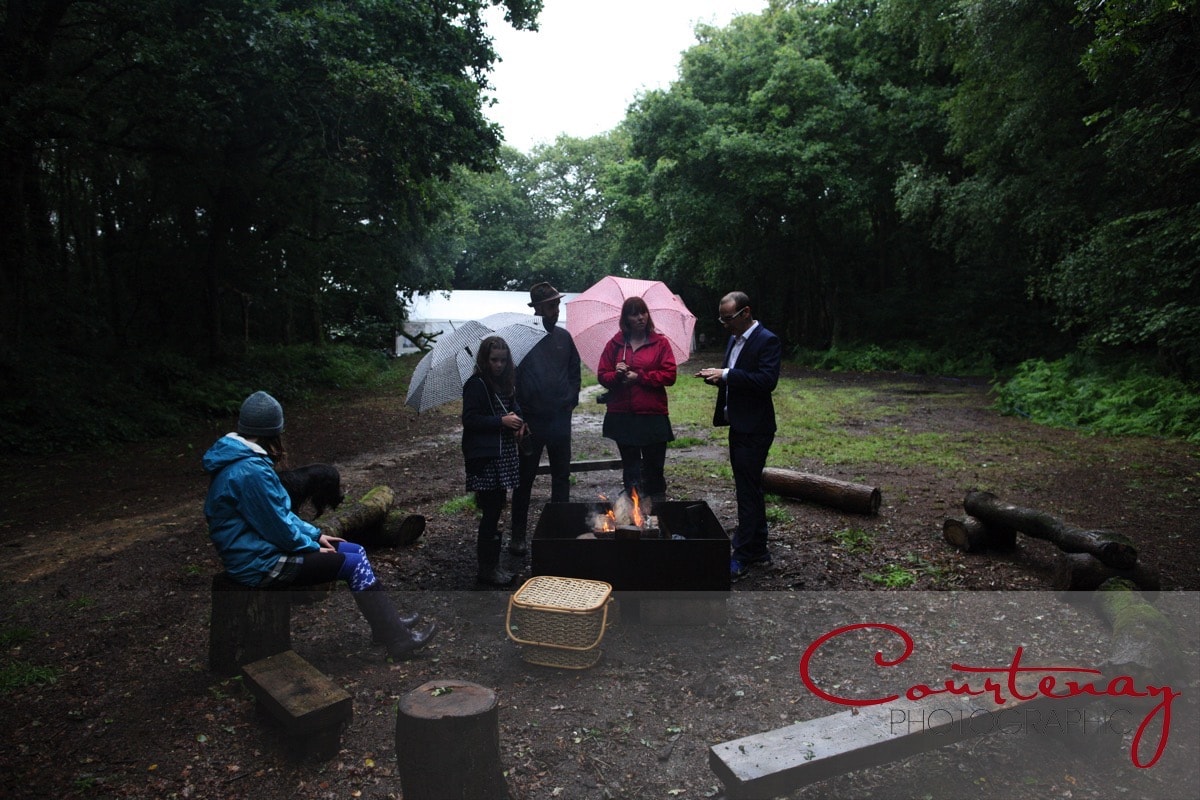 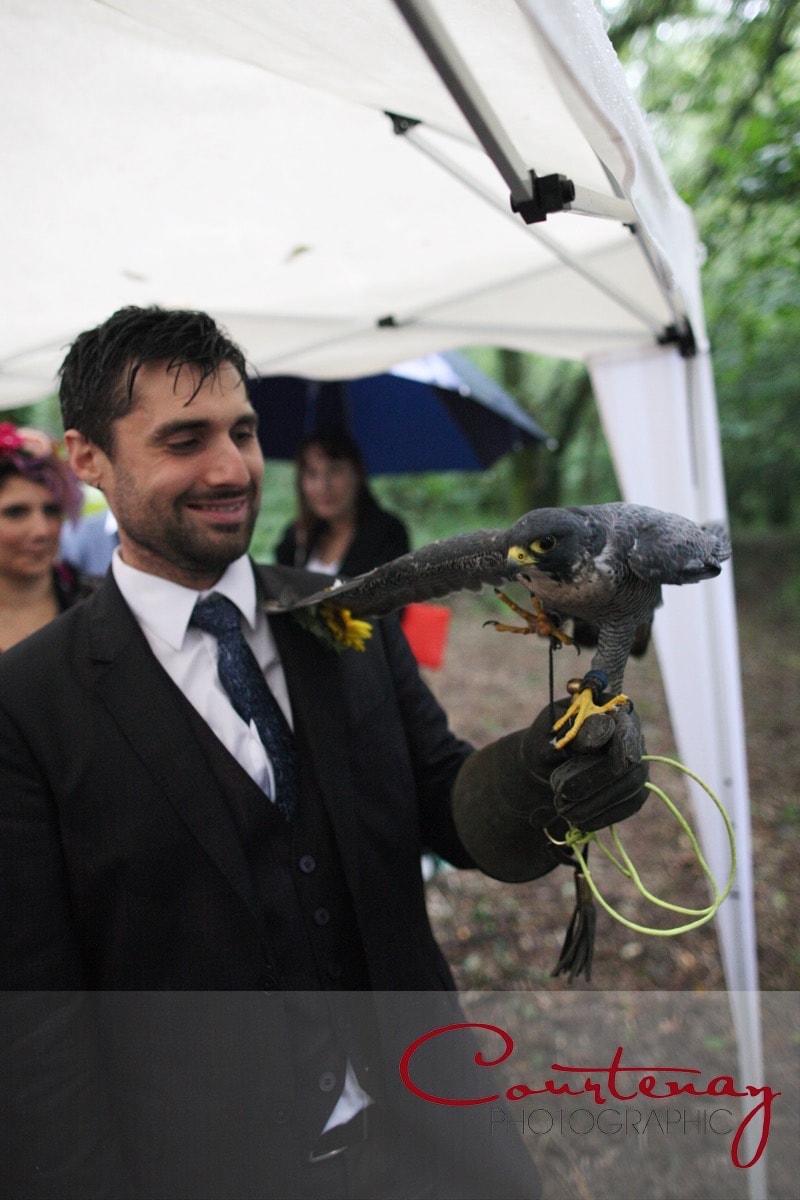 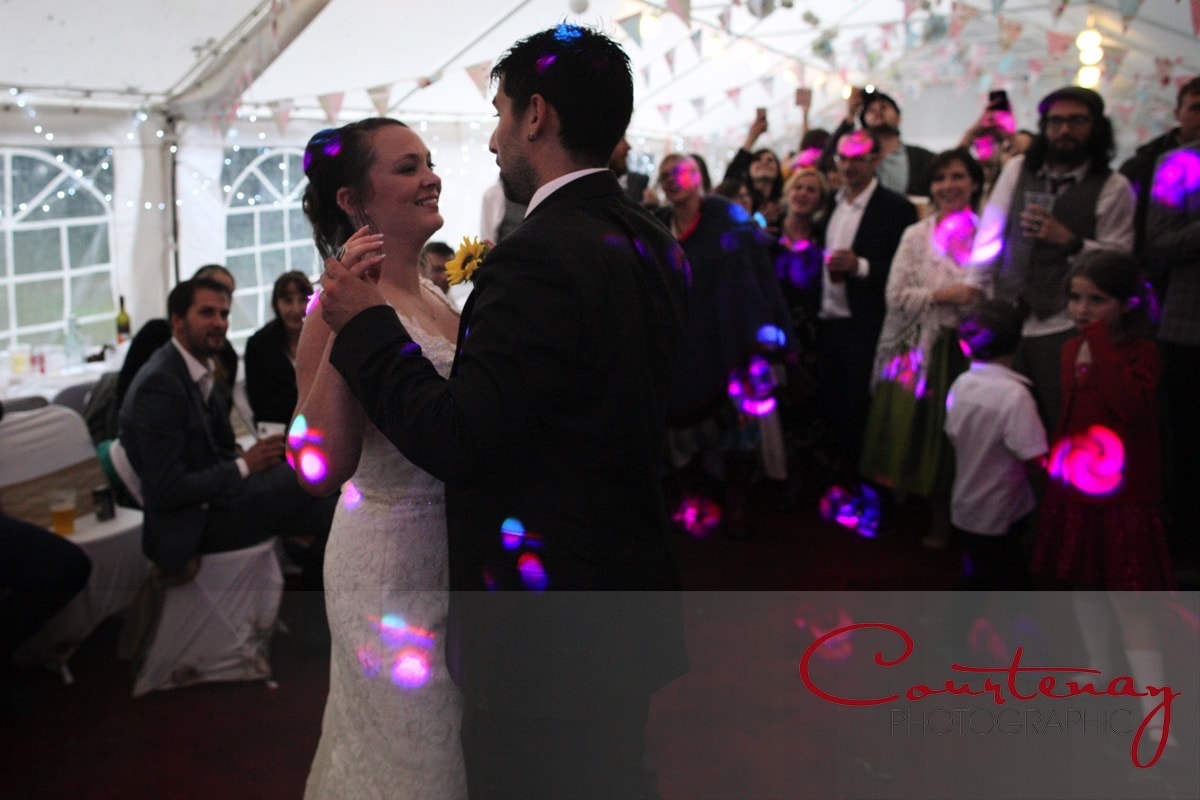 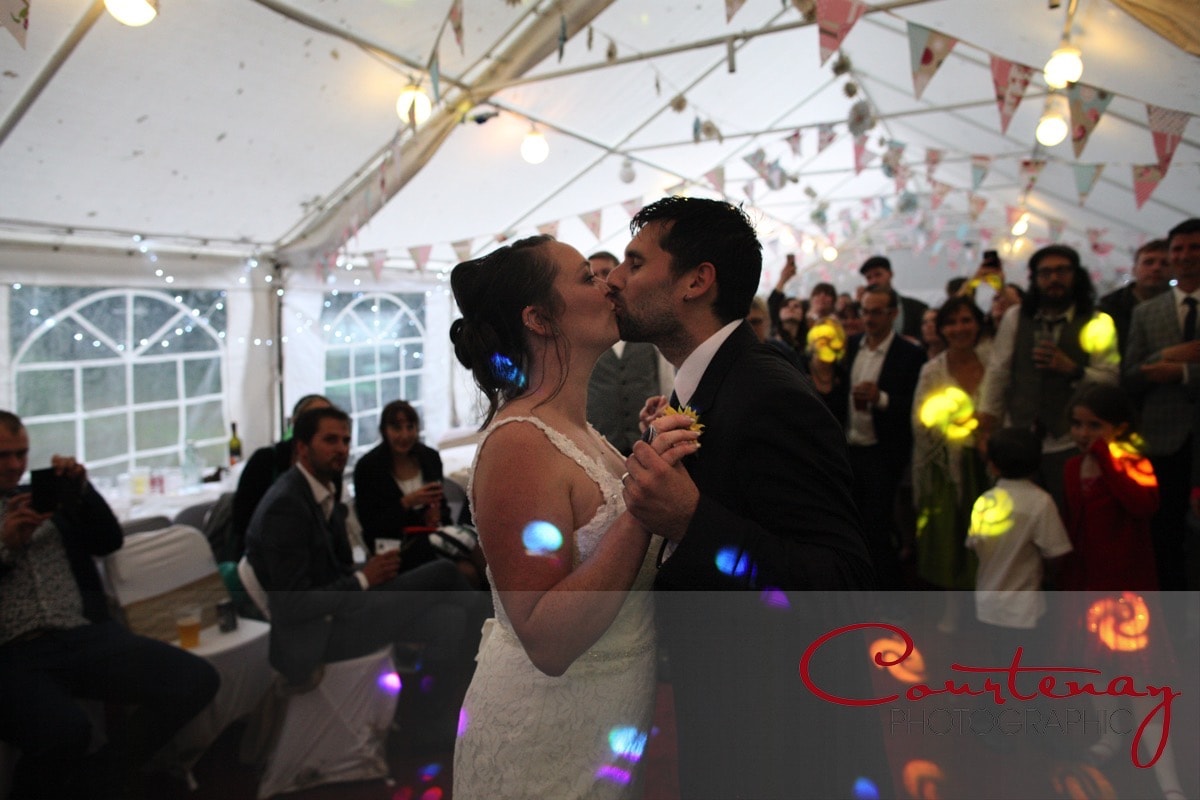 To see Joanna and Michael’s whole wedding album when it goes live, click the following link and add your details to be automatically notified.

All the lovely details from Joanna and Michael’s very wet wedding at the stunning location Milborne Wood near Dorchester in Dorset …. 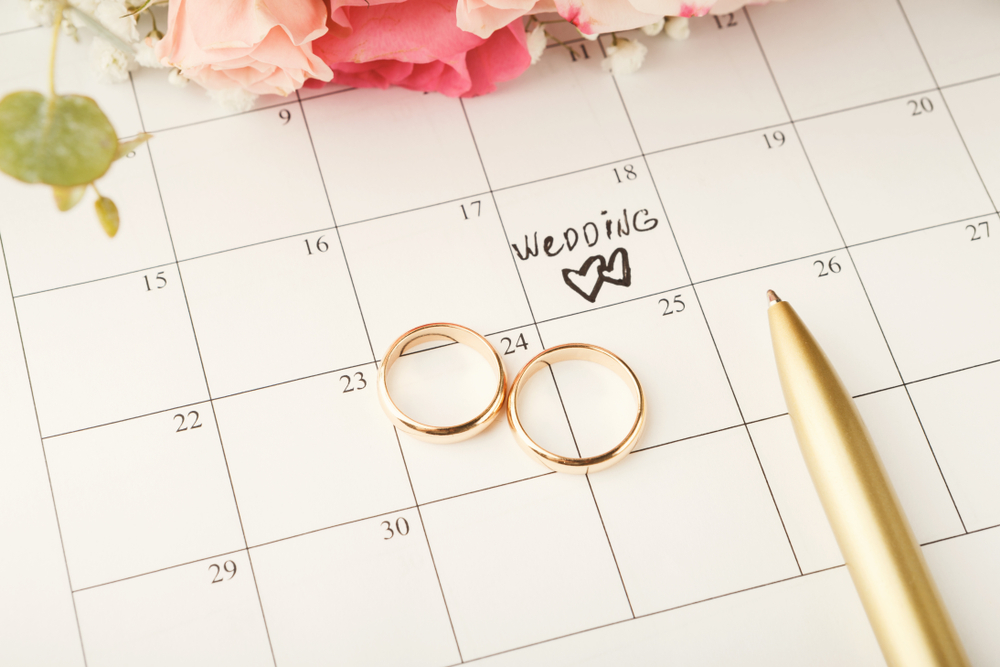 2020 Weddings Update
Re Covid-19 - Where do we stand with wedding bookings?

This site uses Akismet to reduce spam. Learn how your comment data is processed.

@2020 Courtenay Photographic. Try our blog - there's loads of images on there, and all are watermarked and ready for sharing!